BUNNY GIRL: THE QUEST FOR IMMORTALITY

“[...]An ancient legend says a beautiful Chinese girl called Chang-o has been living there for 4,000 years.[...] Okay. We’ll keep a close eye out for the bunny girl.” During the Apollo 11 mission to the moon, Mission control informed the crew that the moon is inhabited by a Chinese goddess, Chang’e, along with her rabbit companion. They have been holding the secret to immortality for 4000 years. People have always looked up to the moon for consolation as an unreachable celestial body, especially in times of grief. Across civilizations, many went on a quest for immortality; however, few, if none have succeeded. From Gilgamesh, to modern advancements in medicine, all have tried to extend the human existence on Earth. What if Earth is not the answer? We turn our eyes to the moon in search of answers, and throughout our project, we try and explore the genetic, cybernetic and social aspects of the human immortality. The system of choice was the inflatable. It is lightweight, easy to carry and a versatile system that is suitable for a lunar project. Along with the inflatable habitat, a layer of regolith is required to protect the inhabitants of the project against the harsh conditions of outer space, and to anchor the project to the lunar surface. Once filled with air, the project rises from under the regolith. Using geometric explorations, we started overlaying an inflatable membrane with an expandable shelves system in order to hold the regolith. The experiment yielded an unsatisfactory result, as a lot of the inflatable membrane was still exposed to the outside environment. By integrating inflating pockets to the inflatable membrane, a collection system can be formed. This system allows for maximum regolith collection on top of the inflatable membrane, and hence protects it from the elements, Larger pockets were located at the lower part of the inflatable to allow for a large volume of regolith to anchor the project in place.

Descriptive of Author : Where life is in suspenvion and immortality is at your reach 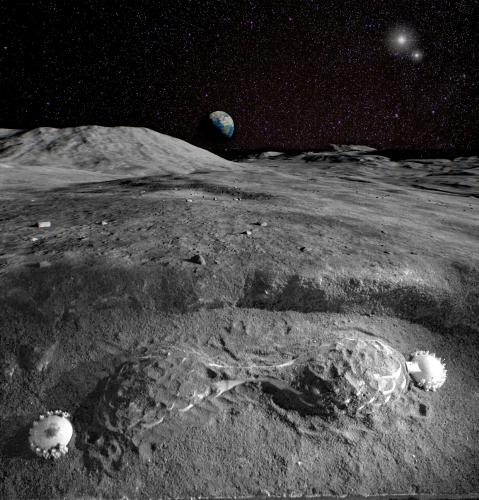 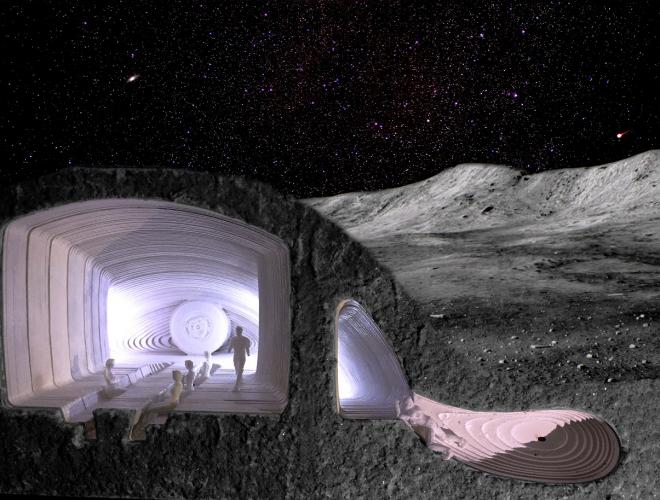