Imagine a future in which all the Earth’s divisions are removed: countries abolished, borders dissolved, and governments overthrown. Such is the version of planet Earth for which “Civilization 0.000”(…) is designed. Envisioning a future free of “unnatural divisions” and where the earth’s resources are measured and meted out according to human need, the project proposes a series of interlinked skyscrapers or “0.000 Units” that harness local earth resources. Each of the units assumes one of 6 key functions: living space, education, resource management, production, energy storage, and electricity generation. Functions are determined by the environment in which the units are sited. At 520m tall, the “Civilization 0.000 skyscrapers” would stand on par with some of the highest skyscrapers in the built world. Dimo Ivanov proposes that the first of the units would be placed at Cape Horn in Southern Chile, and woud be specialized in electricity generation. Making use of the ample wind, wave, and tidal energy of this region, the structure would utilize a combination of 19 wind turbines, 4 wave power plants, and 6 tidal power turbines to create electricity. The entire structure is engineered to provide maximum energy levels, and would convert an estimated 40% of all kinetic energy received into usable electricity. It is projected that the skyscraper would create 100 million kWh of renewable energy each year. Hugging its coastal site at ground level and sinking 260m below the surface of the sea, Cape Horn’s Civilization 0.000 appears to emerge from the ground plane, clad in a material that the architect likens to the “surface of shark skin”. 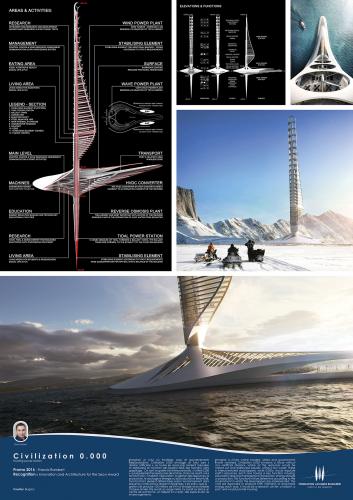 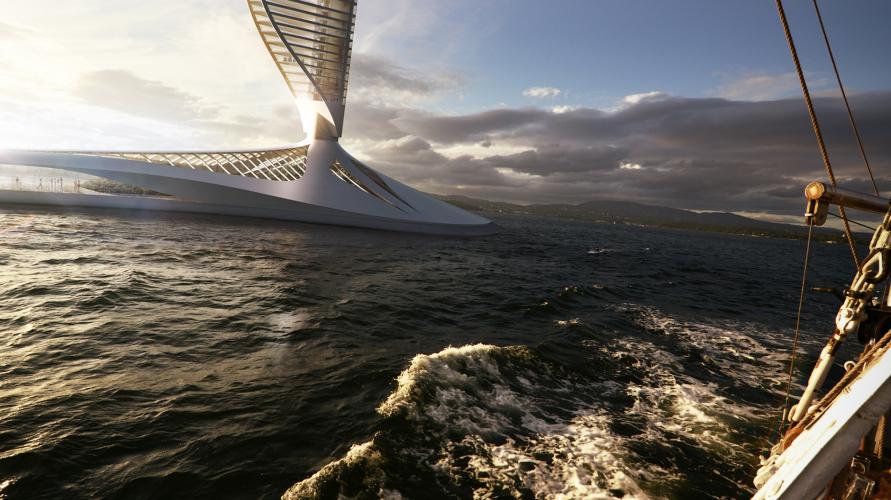