The increase in global population has spiked the demand for habitable lands. This global issue is especially amplified in the scarce island state of Singapore. To alleviate this,the land has been reclaimed, commoditized and manipulated to feed a value system where land is productive for cities and seas for trade. ‘Habitable’ coastlines are constantly expanded while ‘inhabitable’ sea-space is reduced – a system which results in pollution and a de-valued ecology. “Anticipatory Archipelagos” seeks to challenge the value that is assigned to land-sea relations through current practices. The thesis proposes an alternative where there will be no compromise of water in lands’ pursuit. It envisions a restored archipelago where lands and waters are clean and have a different kind of productivity and use value - one that is more rehabilitative and remedial. The scheme manages its environmental concerns through the design of an archipelago which not only acts as an antidote for the already ailing waters but also restores mainland, thus addressing both physical and theoretical concerns of the land-water body. It proposes a time based design which uses land as a system to blur the boundaries of architecture and geography. The islands will gradually morph to be semi man-made, semi natural – its structural reliance shifts from man-made floating platforms to organic biorock structures which secure the lands’ permanence overtime. The islands will eventually evolve into a marine research and nature park and have interim programs such as agriculture, aquaculture, waste treatment and low cost temporary housing for transiting immigrants and marine researchers. Waste treatment, bio remediation and closed loop systems on the island will become the heart of its sustenance.

Descriptive of Author : The Restorative Land 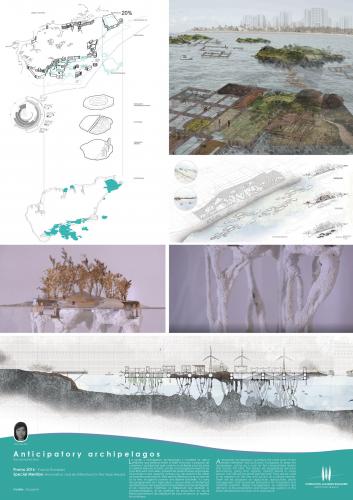