Title : Selenolith
Author : Anton Rakov
Nationality : Russian
Year : 2015
Location : Moon
Biography : 1981 - born in Chapaevsk, Kuibyshev region, Russia 2004 - participant of the Russian pavilion at the Venice architectural biennale, Italy 2005 - graduated from the Samara state architecture and construction university, Russia 2006 - architect, "Kovcheg" bureau, Samara, Russia 2008 - teacher on chair of innovative design at the Samara state architecture and construction university, Russia since 2009 -member of the Union of designers of Russia 2010 - cofounder and leading designer, "Radesign", Samara, Russia 2013 -defended the master's thesis in architecture on the subject "Method of a Humanization of Technical Concepts in Architecture of Extreme Conditions of Dwelling" under the leadership of S. A. Malakhov 2010 - we registered as a commercial organization, but honestly speaking, getting orders is not the primary task for us.
Type : Moon
Scale : S : Building
Size : escalating
Capacity : no limit

This is an architectural concept of assembling protective stone structures on the Moon. The technology of three-dimensional printing with sunlight on lunar soil will make it possible to produce the first stone blocks. Building robots will construct the first man-made objects on lunar surface in history. Stone details will also be needed for the protection of residential modules delivered from the Earth. The main idea of the project lies in the fact that the use of stone details for the protection and operation of lunar settlements brings architecture back to the ancient order system. • Appearance of a base on the Moon will be preceded by experimental uninhabited artificial stone objects - monuments. • The first inhabited objects on the Moon will have massive and durable protection from micrometeorites and radiation. • Artificial stone details on the Moon will be made with the help of special 3d-printers. • For creating the infrastructure of lunar settlements local building material - artificial stone made of lunar soil - will be actively used. The production of stone blocks will require the use of special robots for three-dimensional printing, that will be able to focus sunlight and agglomerate lunar dust layer by layer into solid stone forms. Other tasks of lunar construction, such as collecting lunar soil, moving, lifting and installing stone blocks, will also be fulfilled by robots. After the construction of the first shelter, mobile lunar modules on wheels will be delivered to the Moon. After the construction of sheds of tourist and shift-workers’ houses stationary residential modules will be installed under them. To avoid penetration of radioactive dust into residential modules, entrance and exit of astronauts into and from the residential module occurs into the opening hatch of the spacesuit that is docked with the module. There will be no intrusion of dusty spacesuits into residential area. The triangular shape of landing place is prompted by the specifics of flying machines, for which it is intended. Such machines always fly in one direction, which coincides with the direction of rotation of the Moon and may have a small angular deflection. The flying machines take off from lunar surface vertically. To ensure physical and psychological security, the tourist and shift-workers’ houses are not connected by passage, their windows and docked spacesuits face each other. For security reasons, the fusion reactor is placed behind the protective wall inside a crater and has got circular shape. Next to the open construction laboratory there is a chemical laboratory, which contains all the substances evolved during thermal processing.

Descriptive of Author : is a project of artificial lunar stone 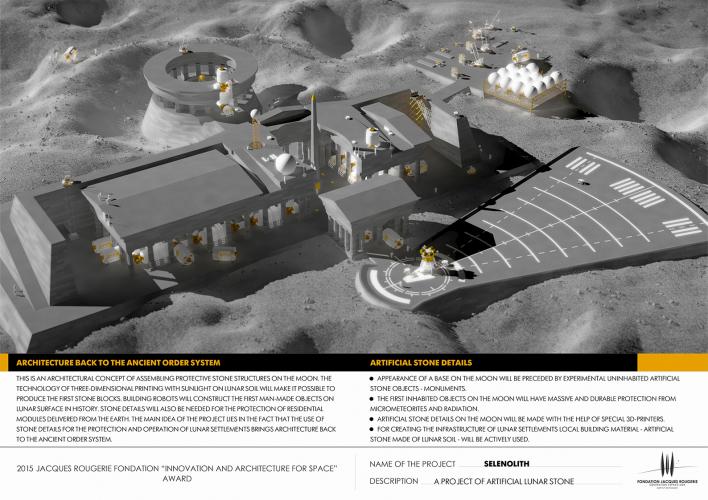 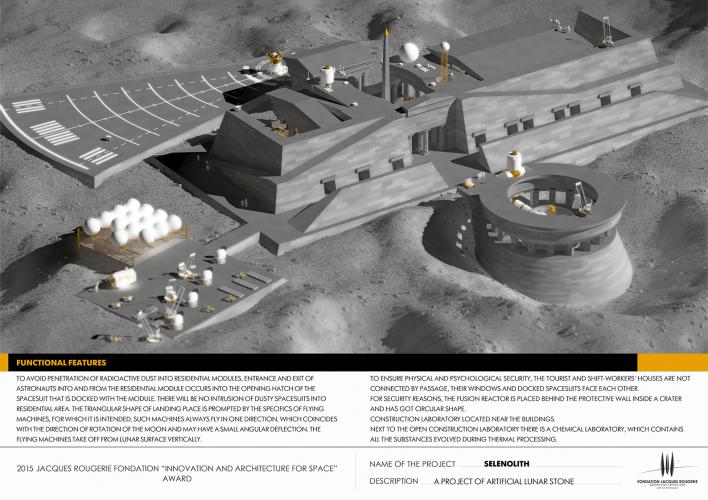